Where Do Crystals Come From?

Crystals are a special kind of solid material where the molecules fit together in a repeating pattern. This pattern causes the material to form all sorts of unique shapes. 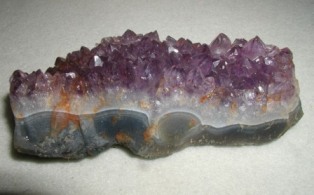 
How do they form?

The process of crystal forming is called crystallization. Crystals often form in nature when liquids cool and start to harden. Certain molecules in the liquid gather together as they attempt to become stable. They do this in a uniform and repeating pattern that forms the crystal.

In nature, crystals can form when liquid rock, called magma, cools. If it cools slowly, then crystals may form. Many valuable crystals such as diamonds, rubies, and emeralds form this way.

What unique properties do crystals have?

Crystals can have very flat surfaces called facets. They can form geometric shapes such as triangles, rectangles, and squares. The shapes are a direct result of the type of molecules and atoms that make up the crystal. Smaller crystals and larger crystals that were formed of the same molecules and in the same method should have similar shapes.

Propahphernalia Purple Fluorite
Sold Out
View
Back to Inhale & Heals